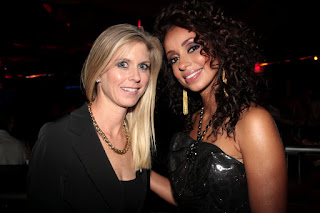 Grammy award winner Mya with Marla Malcolm Beck
Our friends who own Dusk (a club at Caesar’s in Atlantic City) in partnership with the late DJ AM convinced us to stop by last Friday evening. Mya, a Grammy award winner, was showing up to sing a few songs and launch her new album Beauty and the Streets. Me, clubbing? I’m usually in bed by the time Mya was supposed to go on stage, so after putting the kids to bed, wandering around the house looking for something to do at 10 p.m. on a Friday night before it was time to leave, and trying to figure out what to wear, we showed up. Spectacular club, spectacular performance and Mya is so nice. While I was one of the few over 30 in the club and the only one in a pantsuit as opposed to a super-mini-mini-mini dress (seemingly today's club uniform) – I had a blast. Clubbing (is that what people even call it?) has come a long way since the late 80s/early 90s techno days. The whole DJ-as-star thing is fascinating. In fact, DJ Morse Code, who was there that night, got the crowd riled up with his amazing artistic skill. As I am still recovering from being out past my bed time, this will probably be my first and last club experience. Lack of sleep is bad for the skin, but if I were younger. . .
click here to return to bluemercury.com
SHARE THE LOVE
Older Post
Next Post